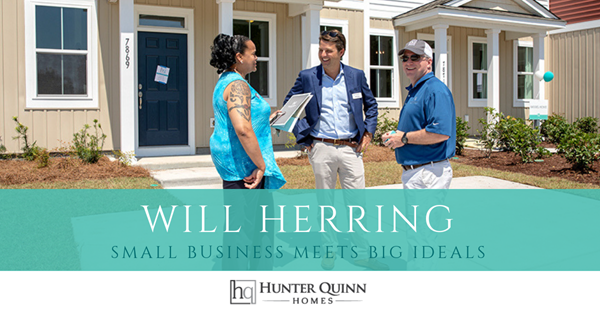 When Will Herring launched Hunter Quinn Homes in 2013, he had a clear vision of the company he wanted—and the one to avoid. His experience told him that the efficiency of a corporate style would be a plus, but his business model would also need the flexibility that a small business can present. He sought to create a homebuilding company where small business meets big ideals. Five years and a few hundred homes later, Will has found the right balance in his business.

“I spent the first year implementing all the systems that most builders don’t get till they’ve been building for a while,” explains Will, a North Carolina native who launched his business by purchasing the property that would later become The Village at Fairmont South. “My goal was to combine the great processes from the big company I worked for with small company culture that I felt would give us the right environment, the right team, and the personal experience our customers should expect.”

“I’ve intentionally hired intelligent folks with experience in a big company and appreciation for a smaller one. They bring ideas and processes that we continue to roll into what is Hunter Quinn Homes’ process.”

Where there’s a Will

From a young age, Will Herring learned to read plat maps and ran documents for hs father, a civil engineer who designed communities. He started his building career like many others, swinging a hammer for a small Charleston homebuilder. A national builder acquired that business and the friendly company culture he was used to was replaced by corporate policies and processes. He stayed on, because while the corporation had its own directives, Will was a problem-solver they valued. They gave him more freedom, but it wasn’t enough. He spent long hours increasing his business knowledge and gaining experience. Two years after the acquisition, Will moved on to a start-up building business with some friends.

“The work went back to being fun again,” he reminisces.

Then came 2008. The homebuilding industry suffered from the recession. The company had merged with two others prior to the downturn but had still operated on its own. When it became a division of the larger ownership, things changed. Will used the time to learn more about every aspect of a homebuilding business.

He was ready to go out and launch his business—and Hunter Quinn Homes transformed from a vision to a real live operation. He continues to bring in the best from both sides of the business world—big and small.

“We pride ourselves on being nimble. If a salesperson tells us that five customers have said, ‘this bedroom is too small’, we change it. A national builder won’t do that.”

The same year that Will added the title of “Business Owner”, he also assumed another role: Dad. His first daughter was born, followed by another two years later.

One of the most valuable leadership lessons that Will learned in his various jobs was the importance of good communication. He encourages his team members to build strong relationship by understanding each other’s behavior traits. Every two years, he brings in a specialist to do the DISC personality profile assessment for every employee.

“It teaches people how to talk to one another, to lean toward their unique personality traits and how they process and communicate,” he explains. “It speaks to individuality and respect for each other.”

Hunter Quinn Homes isn’t just a business for Will. It’s a work of heart. And his team is like family.

Take the LEAP into a New Hunter Quinn Homes in February

Tips for a Dog-Friendly Home

"Amazing company who made sure all our wants and needs for the house were met. Courtney was a star player who showed us the house and made all our dreams come true. Top quality appliances and took any challenge I gave them with designs. Highly recommend."