The History and Heritage of Charleston 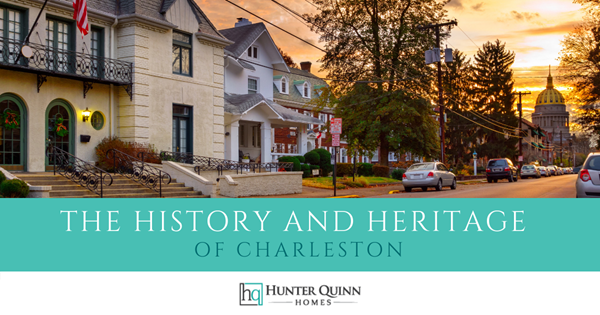 The History and Heritage of Charleston

Charleston is a proud Southern city—and it has every right to be. Charleston is steeped in American history, so much of which is preserved in this area. As a local homebuilder, Hunter Quinn Homes is equally proud of our region and we want to share some of the things you should know about the history and heritage of Charleston.

With its location on the Atlantic coast, Charleston’s history began long before the original colonies were established. “Charles Town” was named in 1670 after King Charles II, by British colonists who came here from Bermuda. Not long after, more settlers came from Bermuda, England, Virginia, and Barbados, and Charles Town became the capital of the colony known as “Carolina”. This port city grew to a center for trade and became the fourth largest city in the colonies by 1770. Agriculture—cotton, rice, indigo plants—was an equally thriving part of the robust economy economy.

In 1774, South Carolina declared its independence from England, which responded by attacking the seaport. Two years later, the Continental Army defeated the British soldiers, who couldn’t break through the tough walls of the sturdy palmetto log walls.

When the American Revolution ended, Charles Town became Charleston in 1783. The Antebellum Period was filled with prosperity with the rise of cotton plantations in the South. The cotton was shipped to New England states where the Industrial Revolution brought about mills to process the fiber.

Throughout the growth of the United States, Charleston remained an integral part of the country, standing strong and contributing a cultural heritage that has made its mark. This Lowcountry metropolis has given us notable leaders, scholars, scientists, and revolutionaries who have impacted the country and the world. When you explore Charleston and the surrounding areas, here are some interesting historical notes to keep in mind:

Wherever you go in and around Charleston, you’ll discover an important part of our past, from  the artfully preserved architecture and historic sites to the people who have been here for generations and contributed to our present.

Hunter Quinn Homes welcomes you to join this community. Whether you want to live in Charleston or one of the scenic cities and towns around it, talk to us about the communities of single-family homes and townhomes we build, our own history of respecting the Carolina way of life, and the lifestyle that’s waiting for you here.

Why Buy New: The True Cost of a Home Renovation

Our Top Tips for Kitchen Organization

BIG logo equals BIG Savings! Mind Blowing Savings are happening now, see how you can save up to $60k on quick-move-in homes...

"We got to work with Chad, Aimee, Courtney and Jay. They made the process of home buying so simple and were accommodating to our every need. As first time home buyers, it was comforting knowing we had a great team to rely on."